Get creative insight and influential views about the world of human resources.

Why I Made the Shocking and Heartbreaking Decision to Get Fired 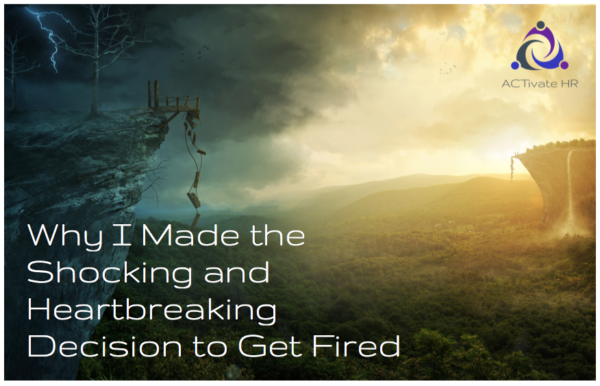 We’ve all heard the saying, “You don’t know what you’ve got, until it’s gone.” In my case, it was the opposite: I didn’t realize how awful my work environment and the company culture was until I left it.

When I joined the organization the company culture was amazing.

Then, slowly over time and as management and senior leaders changed, the culture did as well – we all knew it, we just didn’t know how bad it was going to get. However, because the changes happened slowly and across all areas (the negative culture was driven from the top) we managed to convince ourselves that all workplaces were the same.

When I was no longer with the company, I realized how wrong I was.

I had a successful career. I was regularly taking on new roles and being promoted or having my portfolio expanded. In fact, I had been told I was among the top talent in the organization and was rewarded accordingly. After being in the organization for a couple of years the top management changed. Over the next couple of years so did many executives and other senior managers.

They brought with them a very different approach to leadership and what was considered right and wrong within the organization. As a result, the way employees were treated started to change.

The focus shifted from decisions based on what was in everyone’s best interest to what was cheapest or supported by those with the loudest voice. Bullying and siloed behaviours were rewarded. Good people started to leave and exit interviews pointed to the worsening culture and damaging behaviours of senior leaders.

Nothing was ever done…Even when internal investigations determined complaints about bullying were founded.

(For more on effective bullying and harassment investigations, read this post next.)

After a while, I started to get ill. I got every cold that was going around and always seemed to have a headache. I was stressed all the time, which impacted my time with family and friends. Others that I worked with were also experiencing increased levels of stress and illness.

At this point we knew it was bad, but still convinced ourselves that it was like this in every organization. We were also feeling trapped as there was a recession and it felt like every month another announcement of layoffs was in the news.

We all knew people out of work – many had been for over a year.

So it felt like having a job – any job – was better than being out of work.

Sadly, in this case, the company culture brought out the worst in people.

Team members started undermining each other and trust totally eroded. As long as financial results were attained, bullying continued to be rewarded and thus propagated. People learned who had the most influence and focused their time on getting in those leader’s good books. No one took accountability and blame was thrown around.

(Does this type of toxic company culture sound familiar? Here are five ways to tell if your workplace culture is poisoning you.)

As someone who loves what I do, I no longer wanted to go to work. I was actually starting to get depressed. I came to realize my voice had been stifled and my opinions no longer valued. That somehow, insidiously, fear of what leadership had become, and was turning others into, had changed how I behaved at work as well.

It came to a point where I felt I couldn’t turn a blind eye anymore. I couldn’t sit quietly in meetings or stand by and watch others turn on each other. I knew exactly what it meant – my employment would be terminated. In my mind there was no question of the outcome.

Essentially, the company culture was so bad I chose to be fired in the middle of a recession.

So, I started respectfully disagreeing with my boss. It felt so good to give an honest opinion again. I called out blatant bullying behaviours and wouldn’t let those around me shirk their responsibility. Then I stopped accepting accountability for my boss’s errors. And I respectfully questioned decisions that fell outside of my personal ethics.

As I expected, I was let go from my job.

I never questioned whether I had made the right choice.

What I wasn’t prepared for was the immense relief I felt when I no longer had to go to work in that environment every day.

My health returned, my self-esteem returned and my relationships improved. I am now happy and engaged at work. I learned such a valuable life lesson – no job, no career and no salary is worth suffering through a toxic company culture.

Regardless of the economy or your personal situation, be true to your values and leave because those you love are also suffering, because it can change who you are and how you view yourself and because you deserve so much more.

Did you learn a lot from this post on toxic company culture? Here are three to read next:

“As a result of the training, we feel competent to provide legally defendable investigations for any type of workplace concern. After our experience with them through this training we have engaged them to provide their experience and expertise in several other areas, including workplace culture reviews.

We strongly recommend Krista and the team at ActivateHR to support you.”

“Krista is a highly capable HR professional, and is quick to respond, approachable, and really easy to work with. She and her team really understand various intricacies of HR management. While working with her, she not only prepared the requested document for us, but went above and beyond by coaching me on how to present the document in a correct manner. I strongly recommend her services.”

“Shannon is extremely knowledgeable and up to date on all HR policy and practice areas, knows how to implement and maintain policy in a non bureaucratic way, and is skilled on investigation and follow up when required. She has comprehensive knowledge about HR information systems and operations and can make systems “sing”."

“Joely has been very responsive and helpful from the first conversation had about our business needs. She understands our culture, her knowledge is broad and she is able to give a clear, concise responses in areas we lack. I sincerely recommend adding her to your team.”

“Krista, Joely and Shannon are a professional, trustworthy and results driven team committed to delivering value to the organization.”

“I have no hesitation in recommending both Krista and Joely based on their high level of performance and the confidential manner in which they conduct business on our behalf.”

"Krista and her team have been an absolutely invaluable resource. As a small business owner, having someone as experienced and knowledgeable as Krista on HR laws, guidelines and industry norms available to answer questions and guide us has definitely increased our professionalism, confidence and trust that we are doing the right thing for our people."

“We are a small company that occasionally needs to draw upon the knowledge and expertise of a senior Human Resources Team and we have found ACTivateHR to be a perfect fit for our needs. The ACTivateHR team is responsive and knowledgeable; they understand our HR needs and most definitely provide value-added services. We highly recommend them.”

"ACTivate HR is an amazing company and wonderful to work with. Our company had a large scale investigation occurring, and our team was overloaded and unable to respond to it by ourselves. Upon reaching out to ACTivate HR, I received a quick response from Krista, followed by plenty of great assistance. She was extremely professional and insightful, and provided a thorough report of the findings in a timely manner. I can’t recommend ACTivate HR enough.”

"When working with Krista on some sensitive topics I found Krista was quick to understand the business, responsive and understanding in difficult times and thoroughly professional in her approach to these sensitive issues. I would recommend Krista’s services and will be using them again the future should the need arise!”